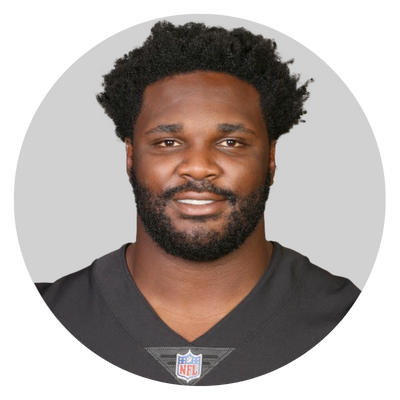 David Vernon “D. J.” Reader Jr. is an American football defensive tackle for the Cincinnati Bengals. Born and raised in Greensboro, North Carolina, D.J. always loved sports and valued family and community.  He played High School football at Grimsley High School and elevated to playing college football at Clemson University where he was a two-sport athlete playing both baseball and football.  In addition to his athletics success, he was a dedicated student and graduated in 3-years with Bachelor of Fine Arts, Communications Degree.  Since being drafted, D.J. wanted to be known for more than just football, he wants to be known for creating real change in communities and making an impact.

In 2019, Reader won the Spirit of the Bull Award for his impact on and off the field, he was also nominated for Walter Payton NFL Man of the Year.  In 2021, D.J. earned more recognition as he accepted earned the ED Block Courage Award that honors players who symbolize professionalism, great strength, and dedication, while also acting as community role models. D.J. has earned several other awards and has been acknowledged for his community service within his collegiate and professional career.

In 2014, following a long fight with Kidney Disease, D.J. lost one of his biggest supporters, his father.  That ignited D.J. to begin raising awareness for Kidney Disease by taking an active role in National Kidney Foundation initiatives. From participating in the National Kidney Walk in Houston, to visiting patients in local hospitals, he’s proven his dedication to the cause.  His foundation A Son Never Forgets, has also hosted free screenings for Kidney Disease at the annual football camp.

D.J. was previously an ambassador for the NFL's Fuel Up to Play 60 efforts, promoting healthier lifestyles among young students.  During his ambassadorship he supported the Kids Triathlon PLAY 60 events and teamed up with organizations such as the United Way to encourage young students to bolster their literacy skills and develop a daily reading habit.

D.J.’s passion for service and philanthropy can be attributed to his mother, Felicia, and his late father, David. Teaching him the importance of giving back and working hard to achieve his goals – something that D.J. carries with him each day.  D.J. is still working hard in football and philanthropy and even sets his eyes on furthering his education and soon completing his Master of Business Administration.

Thank you for supporting A Son Never Forgets Foundation, a project of United Charitable, a registered 501c(3) nonprofit organization EIN #20-4286082. In accordance with IRS regulations, your transaction is tax-deductible to the fullest extent permitted by law. United Charitable has exclusive legal control over the assets contributed.